Operas are through composed. It means the whole story is told by music from the beginning to an end. In musicals, the spoken text and songs tend to alternate. In theatre, spoken text is at times enhanced with musical material. We are going to look at Giacomo Puccini’s La Bohème opera to find out, what kind of musical structures are used to create an opera. 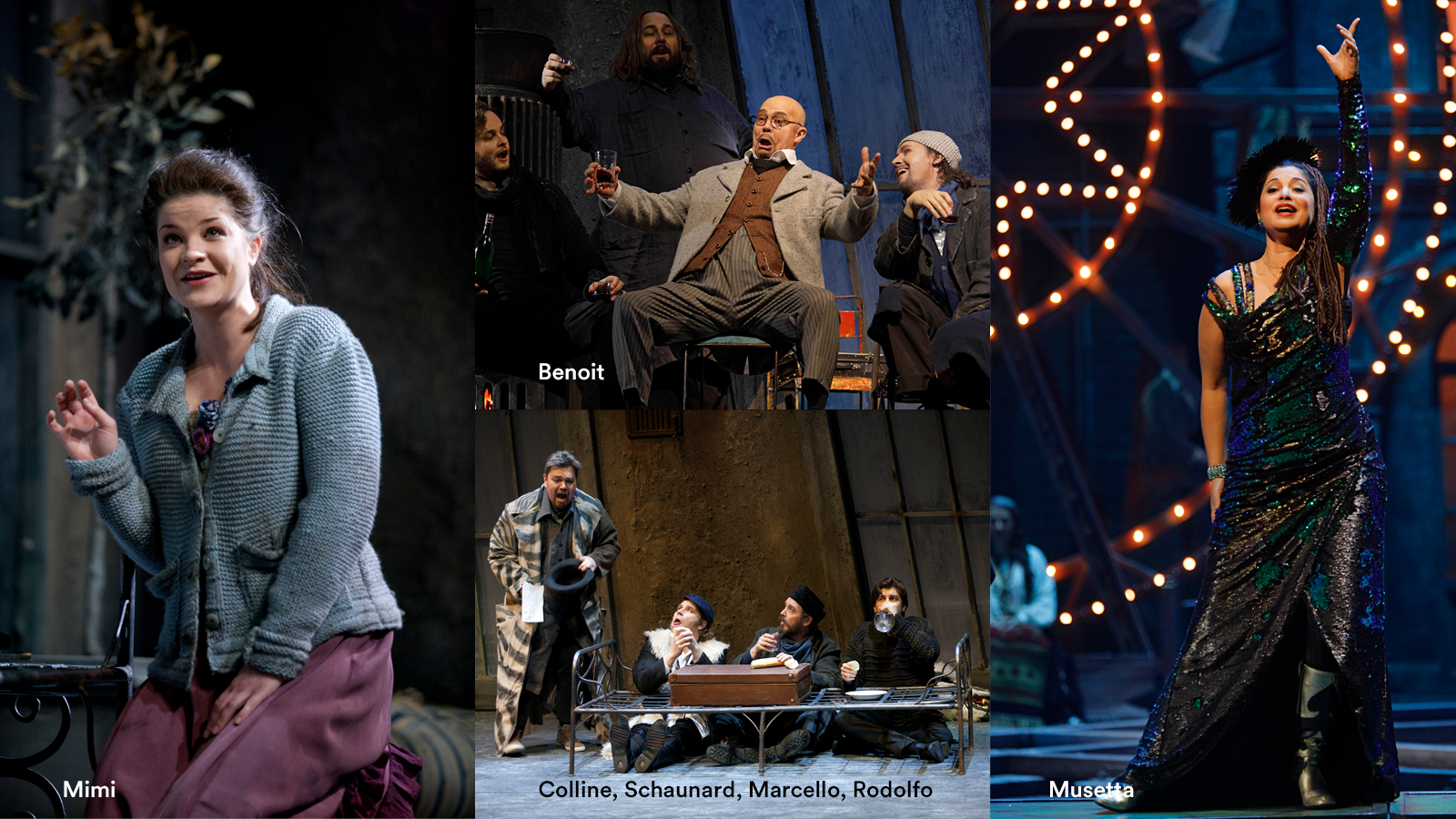 The events take place in Paris, before 1st world war, in theatre time. Young bohemian friends RODOLFO the poet, MARCELLO the painter, SCHAUNARD the musician and COLLINE, the philosopher, share a modest studio flat in the attic. It is Christmas eve and men’s money have run out. Schaunard arrives and brings in good news. He has played music to a wealthy English man’s parrot and has earned some money. The bohemians decide to celebrate in their local cafe. Landlord BENOIT arrives and demands their outstanding rent. In order to get away from the situation, the bohemians offer Landlord drinks until he is drunk. While friends make their way to cafe, Rodolfo stays behind and finishes off the magazine article he has written. MIMI knocks the door. She is looking for someone to light her candle. Rodolfo and Mimi meet the first time and fall in love.

Crowds gather to celebrate Christmas eve at the square. Rodolfo introduces Mimi to his friends. Marcello notices that MUSETTA, his lover, approaches in the company of an older, wealthy gentleman. Musetta teases Marcello but in the end, they make peace. When it is time to pay the bill, Musetta manages to direct it to her older, now somewhat confused, companion.

It is an early February morning by a square gate. Mimi’s heath has weakened. She confides Marcello that perhaps it is time to split up with Rodolfo. Rodolfo comes out of cafe and Mimi hides. Rodolfo tells Marcello he intends to leave Mimi as the loves quarrel constantly. Mimi’s hideaway is discovered, and the lovers agree to separate. Musetta and Marcello begin to quarrel.

At the bohemians’ studio flat, in the attic. Many months have passed since the two friends have seen their ex-lovers. Suddenly Musetta arrives and shares the news: Mimi is very sick, and she cannot climb the steps up. The friends bring her in, and Mimi and Rodolfo sing together a love duet where they share a dream of a warm Spring. They all, in their own unique way, hope to improve Mimi’s condition by selling of some of their dear belongings. Unfortunately, it is too late. Mimi dies and Rodolfo is utterly devastated.

The opera singers’ voices are divided by vocal registers. The register defines the ambitus where one’s voice sounds and resonates the best. The composer, who composes for human voice, uses these registers to make sure that the music can be sung. The opera singers’ vocal technique is highly developed therefore they do not need microphones in order to be heard over the orchestra.

Soprano:  A high female voice.  In many operas soprano tends to be the lead character, or one of them (MIMI and MUSETTA).

Mezzosoprano: A female voice that sounds between soprano and alto. Boys can also be mezzos.

Tenor: A high male voice. In many operas the hero of the story (RODOLFO).

Bassbaritone:  A male voice that is even lower than baritone.

Bass: The lowest voice of them all. Bass can sing truly low notes (COLLINE, BENOIT). 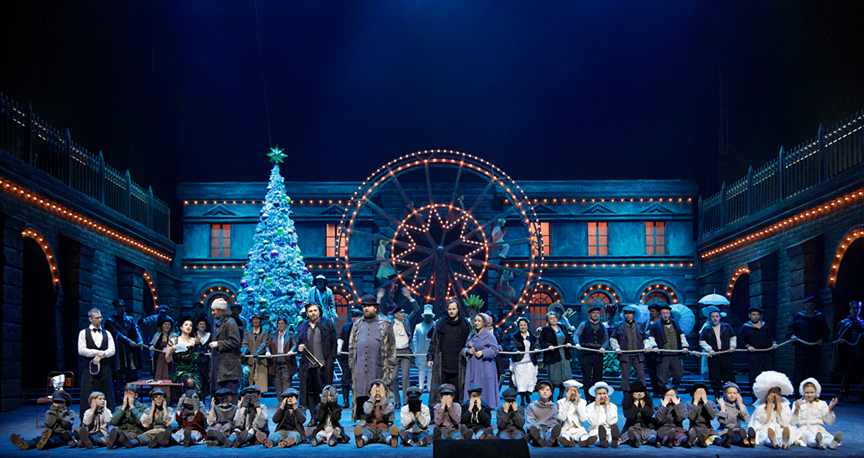 A large group of opera singers, many dozens of them. The sound they make together is powerful. The opera chorus is divided by vocal registers and the material they sing is in parts/ harmony. Mostly choirs are used in large scenes, but one can hear them in smaller ensembles commenting actions on stage as well.  At times members of opera chorus sing smaller roles in operas. The community’s role within the story should not be underestimated. If needed, a large group like this can either support, crush, encourage, threaten or challenge the main characters. 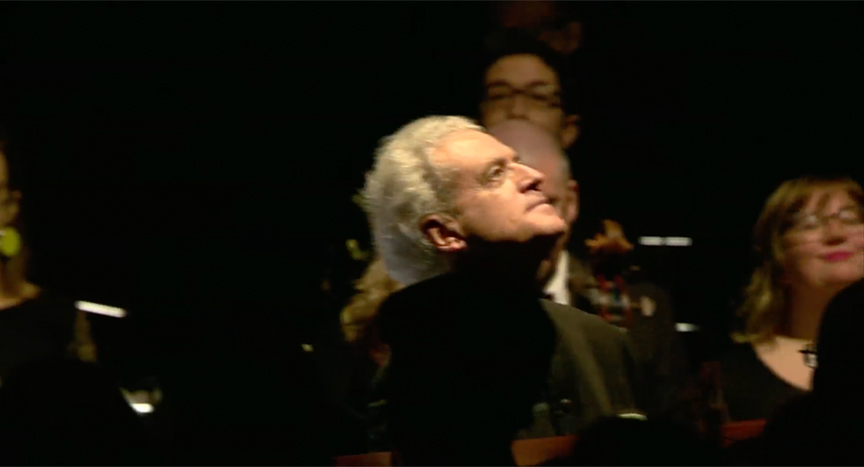 Conductor leads the performance.  He/she communicates without words, using own arms and hands to tell the orchestra and singers how to interpret music. The conductor controls the speed (tempo) of music, and how loud or soft (dynamics) the music is played or sung throughout the opera. It is therefore important, that musicians and singers keep a close eye to the conductors’ movements all the time. The opera begins once the conductor signals orchestra to start playing. 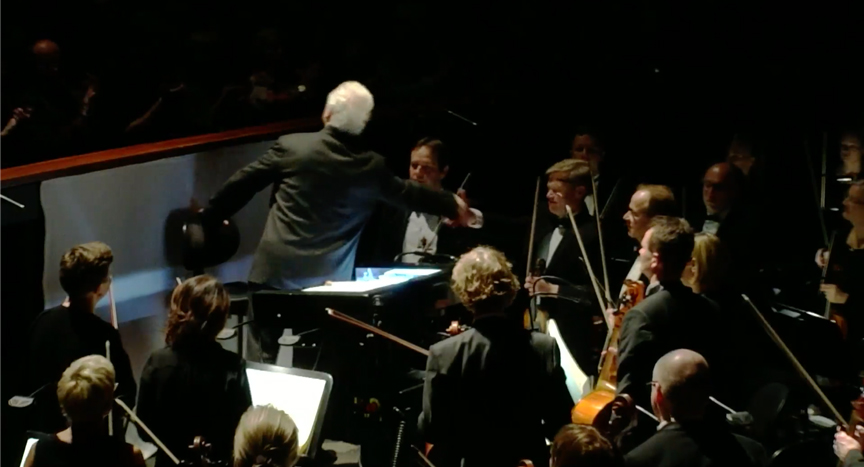 A large group of musicians who play what the composer has written and how conductor instructs them to play. Usually orchestras have many dozens of musicians. They use bow to play string instruments, blow woodwind or brass instruments, and use mallets to hit percussion instruments. One could say that smaller the instrument is in size, the higher the sound is, and the bigger the instrument is in size, the lower the sound is. The orchestra plays in the orchestra pit. The pit is situated front of the stage. Sometimes, a small number of musicians can be seen on stage as part of the action.

Overture leads the listeners musically into the world of opera. It can be a medley of important musical themes that are about to follow as the story unfolds. Overture creates musically time, place and atmosphere, at the time when the stage curtain is still down or about to rise up. It can last several minutes or be just a few bars long introduction that leads straight into action, just like in this excerpt of La Bohème.

Recitative is a type of singing used in operas that reminds of speaking. When one resits, the story narrative moves forward, like in discussions. Just like speaking alone, one can recit alone or it can be a musical dialogue between two or more characters. The role of orchestra is mainly an accompanying one, at times putting emphasis to characters thoughts. Recitative tends to lead into greater vocal scenes such as aria, duet or follow one.

At this opening scene of La Bohème, Marcello works at his picture. He tells how “the Passage of the Red Sea” (name of his painting) makes him feel cold and numb.

Aria is an opera song for one person. In aria, the character takes a lengthy moment to reflect and sings how he/she feels about something. One can sing an aria to oneself or address it to another person or a group. It can be an expression of love, defence or, like in this scene, an opportunity to introduce oneself, just like Mimi does to Rodolfo.

The melodies used in aria are often character’s musical themes. Those themes can be present on stage even when the character is not. Composers like to use this powerful tool in the musical narrative.

Duet is an opera song for two persons. When singing a duet, the characters pause for a moment to express their feelings and thoughts. Duet can be an expression of mutual understanding, love and support, rivalry or competition.

In this clip, Mimi and Rodolfo meet the first time. They fall in love and sing a love duet.

This scene takes place at the Latin quarters. The opera chorus creates an atmosphere of Christmas eve and a jolly market mood front of the café.

Interlude is music, that orchestra plays during scene changes (set is being moved behind the curtain) or after the interval at the beginning of a new act. Again, the music creates an atmosphere, a reminder of what just happened, or gives a glimpse of what is about happen.

Ensemble is a song for many characters who simultaneously express vocally their feelings and thoughts.

In this excerpt, the composer uses characters’ melodic themes to tell us who really has the power.

The lovers quarrel in the Christmas market. Musetta sings an aria of how she enjoys the looks men give her and teases Marcello.  Others sing their comments about this. Marcello stays silent and listens, until he cannot hold his feelings back anymore. Marcello is lost in love, he sings Musetta’s melodic themes as he declares his love to her.

Session 2. About the thematics of this opera

1. Think about the following questions:

2. La Bohème creates a picture of life in the 19th century. The interpretation of this production is set in a theatre time before the 1st world war. The first performance of La Bohème took place over 130 years ago and the story itself is nearly 170 years old.

Think about the thematic of this peace:

You can look at the concept locally, nationally and internationally.

3. Towards the end of this opera, in order to help their sick friend out, the young bohemians are willing to let go of the little material possessions they have. Musetta sells her earrings so that Mimi can have a muff to warm her hands. Colline sells his coat for medicine.

4. One of the many valuable meanings of art is the fact, that through an artistic experience we have a possibility to engage ourselves with current and timeless affairs and create views about matters of the world.