Twists and turns of the Finnish National Ballet 1

It was indeed thanks to Edward Fazer that Finland got its first ballet company. The Swiss-born Fazer brothers have influenced the Finnish society in many fields: Konrad started an enduring music shop, Karl founded a patisserie and sweets factory, and Edvard was the first ever director of the Finnish Opera. Edvard Fazer’s interest in opera and ballet was already evident in first decade of the 20th century. He formed a group of dancers from the Imperial Russian Ballet, which starred the legendary Anna Pavlova and successfully toured Europe from Helsinki to Vienna. In Finland, the group performed in 1908 at the Finnish National Theatre, which had only been completed a few years before.

From autumn 1921, dancers were being recruited to the operetta Die Fledermaus and the dance scenes of the opera Eugene Onegin. The first ever permanent dancer tenure was given to Vyborg-born Mary Paischeff who’d studied in St. Petersburg. Paischeff brought George Gé from St. Petersburg to work as the new group’s ballet master. The self-taught Gé had immersed himself in ballet as the pianist of a ballet school in St. Petersburg. Fazer trusted his skills and dedication to establishing the ballet company, and Gé eventually stayed in his role until 1962.

In its early days, the ballet company of the Finnish Opera comprised only inexperienced beginners. Dancers were recruited from the private ballet schools of Helsinki, and standards varied greatly. Only a few dancers knew how to dance en pointe, and their ballet-shoes were handcrafted. Paischeff, who had managed to get hold of ballet shoes from Italy, took on the lead role of Odette-Odile in Swan Lake. As male dancers were in short supply, Gé himself danced as Prince Siegfried, despite his inadequate skills. Walking roles were given to singers, such as Elbe Nissinen who appeared as the Queen Mother. Edvard Fazer, Oskar Merikanto and Tauno Hannikainen took turns as rehearsal pianists.

The first performance of the ballet company was Swan Lake, which premiered on 17 January 1922. This daring choice of debut showcased Fazer and Gé’s ambition: the ballet, which was to become a world-famous classic, had previously only been performed by the major ballet companies of Russia and Prague. The audience and the press understood the historic significance of the premiere, and newspapers teemed with elaborate descriptions of the new ”beautiful movement art” that was emerging in Finland. 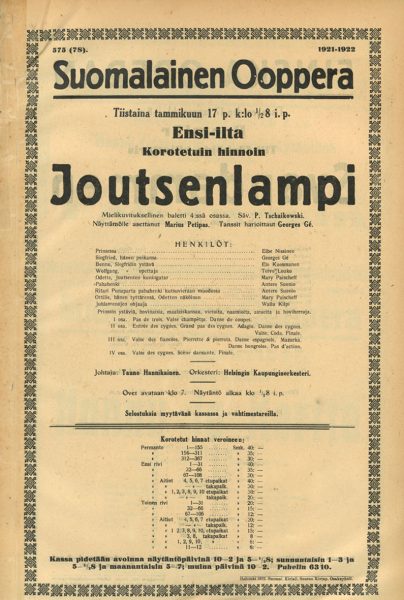 It’s difficult to rate the first performance today, as no film footage is available, and the long exposure times of early 20th century photography produced artificially rigid poses. Reviews were mostly written by music critics with scant experience of ballet, and the dancers themselves became overly critical of their early appearances later on. The audience, however, received the ballet with enthusiasm, so Finland’s first ballet company had made its mark!

Once it got over its teething troubles, the ballet company advanced in great strides, and many notable Finns were spotted in the audience. General Mannerheim was a regular in the front row and, since the premiere of Swan Lake, President Ståhlberg and his wife were often seen in their box. Swan Lake was performed to a full house throughout spring 1922. The most popular production of the entire season, the ballet enabled the Finnish Opera to pay its singers’ wages, too.

The events that brought a ballet company to newly independent Finland were mirrored in Estonia and Latvia. The two countries saw their first ever ballet performances at the end of the same year, and the new ballet groups were also established at opera companies. Though ballet had been popular since the 18th century in the old central European monarchies, as well as in Denmark, Sweden and Russia, many of today’s leading ballet companies were not founded until the 20th century. The Royal Ballet in London, New York’s American Ballet Theatre and the New York City Ballet were all established after the Finnish National Ballet.

Mary Paischeff was the first ever Odette/Odile

Watch on Yle Areena (in Finnish, no subtitles)